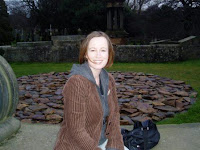 In the third of our interviews with the contributors to the Special Section on Paul Ricoeur (TCS 27.5), Simon Dawes interviews Lisa Jones, whose translation of Ricoeur’s lecture on Hannah Arendt and violence, and whose own article on Ricoeur’s idea of the Author, feature in the section.
Photo: Lisa Jones

Simon Dawes: Could you tell us a little about Ricoeur and your interest in his work?

Lisa Jones: To start with, I should say that I work primarily within the Anglo-American philosophical tradition, and in that tradition Ricoeur is of course best-known for his major works on narrative and identity published in the 1980s and early 1990s, namely Time and Narrative and Oneself As Another.

Back when I was carrying out research for my PhD, on the topic of the cognitive values of fictional literature, I became interested in exploring the powers and value of narrative per se. Ricoeur was, naturally, a major source to look to. His work in this area impressed me hugely. I quickly became a convert to the idea of narrative identity, and have since wondered just how far one can run with this notion.

SD: Your article deals with the implications of Ricoeur’s model of narrative identity, and you focus on the paradoxes of anticipation and retrospection. Could you briefly tell us a little more about this?

LJ: Yes – in brief, the model of narrative identity is proposed by Ricoeur as a solution to both the paradoxes of time – as experienced by human beings – and of identity – how we can remain the ‘same’ person despite changes that necessarily occur with the passage of time. The notion of a ‘narrative identity’ resolves (or, dissolves) these paradoxes, and provides us with a robust understanding of the self that emphasises the ethical dimension of our lives. What I’m most interested in here is how far we can go with the idea of viewing our lives as narratives. The narrative construal helps us to make sense of our lives – we refigure our past in configuring our present – but I also think it plays an equally important role in helping us to work out how we should live: if our lives are narratives, this is not just because we configure the present but also because we ‘figure’ the future. Figuring, or plotting, our futures makes us authors as well as narrators of our lives, and this adds a further dimension to the notion of the self.

SD: Your translation of Ricoeur’s lecture on Hannah Arendt is also featured in the special section. What was it like to translate him? Was his style of writing (and of speaking) difficult to translate into English in any way?

LJ: Well, the classic translator’s dilemma is always how to strike the right balance between making a text sound ‘right’ in the target language (fluid and natural), but not losing all traces of the ‘voice’ of the writer. Ricoeur has a very recognisable voice, I think – his syntax has a unique quality to it, and his texts are often read as if they are transcripts of a spoken presentation, rather than written papers. I wanted to make sure his personal and engaging tone was not erased in the translation, which means that at times the English sounds a little odd, a little un-English; but I think the content is conveyed while still retaining something of the manner and style of Ricoeur’s thought too.

Lisa Jones is Senior Teaching Fellow in the Department of Moral Philosophy at the University of St Andrews, UK. Her research interests are in aesthetics – principally at the intersection of philosophy and literature – and also in ontology of art, narrative, imagination, and ethical issues in art. [email: lj14@st-andrews.ac.uk]

Simon Dawes is Editor of the TCS Website, and Editorial Assistant to Theory, Culture & Society and Body & Society

To read Lisa’s translation of Ricoeur’s ‘Power and Violence’ or her article ‘Oneself as Author’, or any of the other articles in the Special Section on Paul Ricoeur or in the rest of the September issue of TCS (27.5), go here

To read our TCS Blog Exclusive, ‘How to Read Ricoeur: A Guide Through Ricoeur’s Key Texts’ by Alison Scott-Baumann, go here