In the first of Jennifer Barth’s reports as TCS Website Researcher, she discusses the recent talk given by Boris Groys in London.

Groys is perhaps most famous among Anglophones for his work on Russian avant-garde art, the ‘post-communist condition’ and the relationship between art and power. A special section on Boris Groys, edited by Matthias Benzer and Hannah Abdullah, will be published in TCS in early 2011.

Apparently rumours of the demise of communism are greatly exaggerated. Just ask Londoners gathered at the ICA on 21 July to hear German philosopher Boris Groys on his recently translated, A Communist Postscript. As one man notes: “More and more people are questioning the way the economy is working. People are looking for other possibilities, not just shortened work weeks or taking sick days, but thinking this capitalism thing is not great and asking: what are the other options?” If, as Groys suggests, the central law of dialectical materialism is to think in paradoxes, there is no better time to ask the question his manifesto begs: what is the promise of post-communism?

The long shadow of the fall of 20th century Communism was recast when the Romanian government exhumed the bodies of Nicolae Ceausescu and his wife for DNA testing on 21 July, 2010. The couple were shot by firing squad on Christmas Day 1989 after a summary trial in one of the darkest days of an otherwise globally uplifting series of moments that announced an end to the Cold War and some of its late despotic certainties and privileges. It seemed the final chapter in a dramatic chain of events triggered by the escape of more than 13,000 East German tourists through a tired and porous Hungarian border. This is most prevalently recalled in populist history as the inevitable outcome of the Peaceful Revolution in East Germany culminating in the fateful ‘Fall of the Wall’.

But as with all historical interpretations reality is manifold and congested by intersecting public and private moments historically situated but ever present on the world stage. Shameful abuses of power and erosion of ideological constants were wounded that day with the bullet ridden corpses of Romania’s ruling elite but Groys anecdotally suggests Communism lies more dormant than dead. The ideological refugees have lived to see another day and a new wave of post Communist philosophers and intellectuals led by Groys, Toni Negri and Alain Badiou offer reinvigorated and counter-capitalist theories of social movements. Politics is reborn in these visions at the expense of an essentialist and ultimately material interpretation of economic and political relations in the 21st century.

Groys suggests the lessons of Soviet communism can reinvigorate a break with existing liberal democratic systems. Most notably, he argues that communism’s vision of a society ruled by language and philosophy endures and challenges the rule of money in a capitalist economy. Language, Groys asserts, is a medium of equality that can undermine the irrationality of action in the current organisation of economic and social life. That is a shift from economy to the realm of the political and philosophical but one that attempts to build upon the lesson-laden terrors of the past. The packed halls of the ICA were not just filled with time-worn clichés of forgotten politics but rejuvenated hope in alternate realities beyond the scope of the ever present claustrophobic grip of capitalist dogma. 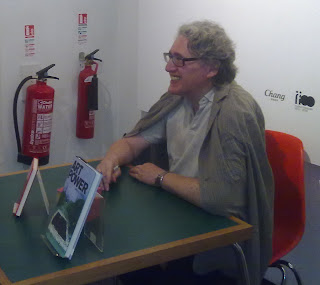 Image: Boris Groys at a book-signing after the talk at the ICA (Photo by Jennifer Barth)

It is Groys’ “accessible style” that draws the attention of a third year arts undergraduate. His well-known art criticism is the catalyst for many who attend the talk, with one woman putting it succinctly when she asked, “How art operates in all of this”.

Groys’ contention that language sits just behind the surface of images might inspire an emergent conflation of art and language, from theory to action. Behind the superficial organisation of everyday capitalist life sits the irrationality of action; somewhere between the two there must be the potential for self realisation to propel persistent philosophical enquiry.

As one audience member points out this message is difficult to grasp as a form of action: “Surely such irrationality is not irrational for the people that control capitalism – for the multi-millionaires and bankers at the forefront of the economy – in their eyes, can capitalism be irrational?” It would, in other words, take those operating the economy to question their own commitments. Groys’ response is economic action takes guts, speed, and killer instincts; these are all basically irrational. As such, he considers that likely yes – those enacting the economy do understand that it is irrational. But surely if capitalists are self-aware of the inherent irrationalities of their actions, they have both considered the implications and crafted a rational response for continuity. Alternately they stopped short of this vital step in understanding. Either way the challenge for re-emergent Communist ideologies is how to access these moments in the public conscious and conversation. This is precisely the domain of language but also speaks to its apparent limitations for revolution. Persistent consideration reveals not only the possibilities but the enduring threats. Isolated North Korea and tentatively reforming China offer little inspiration for the call of rejuvenated Communist politics. It can easily be suggested that like financial regulation of markets, Communism is a good idea but in practice it just doesn’t work.

Perhaps like Walter Benjamin’s penchant for the mythical, there is unearthed possibility in the not quite tangible spaces between image and language. For actors to understand basic motivations there must be a momentary hesitation between the organisation of society and the daily repetitive activities of self-aware paradox. Groys suggests that yes, those enacting capitalism do understand that it is irrational. Such hesitation between the rational organisation of everyday life and the irrationality of its enactment meet, mesh and meld into new linguistic attachments. As one attendee suggests, “the move away from capitalist logic will be a journey, slow, difficult, but worth the wait”. Upon the jagged shards of the Wall, new – or in this case renewed – political and social movements can and do emerge and endure. Perhaps it is the renewed discussion itself that proves more important than the political project of the post-communist turn.

Boris Groys is Professor of Aesthetics, Art History, and Media Theory at the Center for Art and Media Technology in Karlsruhe, and Distinguished Professor in the Faculty of Arts and Science, NYU. His books include The Total Art of Stalinism, Ilya Kabakov: The Man Who Flew into Space from His Apartment, Art Power and The Communist Postscript

The forthcoming TCS Special Section on Boris Groys will include an article by and interview with Groys, as well as a review of The Communist Postscript

Jennifer Barth is a social researcher at the School of Geography (University of Oxford), Research Director for Smoothmedia, and now Website Researcher for TCS