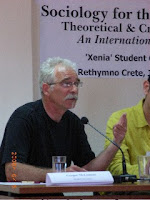 In anticipation of the forthcoming publication of the new issue of TCS (27.4), Simon Dawes interviews Gregor McLennan, whose article, ‘The Postsecular Turn’, opens the issue.

Simon Dawes: Your controversial article argues that much of the recent postsecular literature in critical social theory is actually not that postsecular at all. You refer to it, rather, as intrasecular, and claim that it is more about “…explaining ways of thinking and acting that are not especially secular, and about cultivating ways of being secular that are inclusive and low-key”. Would you be supportive of such an explicitly ‘modest aspiration’, or would that too be problematic?

Gregor McLennan: The main problem with arguments about ‘secularism’ is that it is too often equated with atheism, and that’s not right. You can be religious but also secular, and atheist without agreeing, for example, that religious motivation should always be confined to the ‘private’ sphere. So as a matter of politics, if one is a radical democrat of some kind, then I think you must be relatively low key about secularism and not gratuitously hostile to religious people who want to publicly organize around their religious identity and express their views on politics in those terms.

Above all, progressive non-believers can make very good common political and ethical cause with many religious people and organizations around poverty, inequality, anti-capitalism and so on. But political secularism is based on some kind of principled separation between state/government and religion, and so we can’t be too modest and low key about this when we feel that theocracy is approaching, or that too many religious people (and not only religious) are getting too concerned about their precious identities being offended against. A good democratic intellectual culture is one that must include challenging our identities and beliefs as persons and traditions. And if by secularism we mean ‘atheism’ or non-believing, then as long as the point about progressive political alliances between religious and nonreligious people is well taken (i.e. ontological disagreement does not at all mean there is not plenty to agree about in terms of what’s wrong with the world), then it is only a matter of intellectual honesty to specify that from an atheistic/scientific/secular perspective, religious believers may in some basic way be considered mistaken about the nature of the world. This needn’t be dogmatically formulated, nor religious people regarded as dupes (not least because it’s often not that simple what religious believers do actually ‘believe’ in – be it gods and other supernatural entities etc); but godless people should certainly not apologise for their critical attitude to religions, on that ontological/epistemological level.

SD: Could you elaborate on what you mean by ‘intrasecular’ and by the claim that postsecularism is more a ‘spectrum of possibilities’ than a clear position?

GM: You could look at postsecularism as the sort of frame of mind that now thinks that the (supposed) previous secular stance is problematical going on plain wrong – that religious belief ought to and will die out as modern collective scientific development progresses; that religion has no place in the democratic public sphere/state; that social theory and social science cannot be other than methodologically atheistic (and probably substantively and normatively too). So that would leave two sorts of positions as outside the postsecular spectrum, a) those atheistic-secular attitudes for whom the now-problematical views remain completely unproblematical and obviously right, and b) those religious types who think of secularism itself as a nasty mistaken ideology, wrong in every respect, and eventually to be overcome by the work and truth of the spiritually faithful. Within those two extremes are people who think that secularism as stated is in some way problematical and in need of a big rethink. But there will be those who will rethink this in some kind of ‘nonbelieving’ way (the ‘religiously unmusical’), and others who are religious or very sympathetic to religion and the qualities that it apparently brings to people’s lives, but who accept that either pragmatically or in some kind of intelligent principled balancing act a more complex secularism can be developed that is not hostile to religious citizens. Clearly, there will be many variants and formulations along that spectrum, partly because of the complexities of the connections, including some possible disconnections, between ‘political’ secularism and questions of religious belief/atheism. Now, it seems to be the dominant position within social and cultural theory right now – or at least one prominent position – that appears to be so anti-secularist and so sympathetic to religious people’s burdens under statist forms of secularism that they are anti-secularist in toto. But this – so I try to show in my article – is not really the case. Both intellectually and politically, these apparent anti-secularists are either something like subtle or complex or progressive non-sectarian secularists; or they are ‘postsecularists’ where that term is a matter of problematisation, not complete rejection, and certainly not directly supportive of the idea that the revival of religion in politics/society is necessarily a good thing.

SD: What do you make of Talal Asad’s suggestion that the epistemological distinction between public and private life (and between citizens and consumers) is a consequence (and, presumably, only valid as part) of a secular rational ideology?

GM: I’m not sure that’s what Asad does argue, though it’s certainly what some sociologists of religion like Jose Casanova argue. In some ways, one can see what the general point is here, but it strikes me firstly as an essentially idealist mode of understanding change (we systematise some ideological principles, then social life gets organized around them, which we then see ‘naturalistically’ as the inevitable course of society itself, when in fact we have imposed it). No doubt elites both academic and governmental have their causal powers, but what happened to more generalised thinking to the effect that the public/private split in modern societies was not so much a matter of secularist ideology but rather a matter of capitalism, and then, ahead of secularism in the ideological spin off menus, a matter of liberalism? No doubt liberalism itself is bound up with a certain kind of secularist mind-set, but I don’t think this has been obviously a matter of doctrine as such – no society really has been ‘secularist’ as such, in the way defined by someone like Robert Audi – full separation of state and church, all religions treated equally, the state is neutral as between religious and nonreligious citizens/organizations. So to talk of the ‘secular state’ as if that’s more informative and holds greater critical purchase than talking about the way in which the capitalist-liberal formation gave rise to complex, variable and in various ways problematical ideologies of public debate and organization (which is one way of summarising part of Asad’s approach – genealogical, not ideational, and not especially normative, though he can’t help chipping in from time to time…) seems to me a bit of an intellectual regress. Postsecularism in that context does become quite useful for unravelling some things and re-weaving them: what exactly is it we don’t like about the public/private split, and what, risks aside, is actually quite good about it – none of us surely still wants to argue, for example, for a completely transparent, open-house and collectivist way of living, do we? But that sort of critical rethinking can’t be usefully taken forward, it seems to me, if people just fall headlong into the assumption that it’s perfectly obvious what secularism is, and that it’s necessarily bad – or that some kind of obvious democratic justice is being done by everyone being super-appreciative of religious identities and claims.

SD: Your article focuses on critiquing the reductive treatments of secularism in the genealogical work of Asad, in Rosi Braidotti’s neo-vitalist perspective, and in the anti-historical work of Judith Butler and Dipesh Chakrabarty, taking in Foucauldian, feminist and postcolonial approaches to postsecularism. Can you imagine a postsecular critique in any of these areas that didn’t rely on secular conceptual resources, and that could offer a less reductive treatment of secularism?

GM: There’s part of Asad that is intriguing and deep that I think tries hard to be loyal, so to speak, to whatever is ‘non-conceptual’ in our spiritual investments and values; and that’s probably true of Chakrabarty too in a way. But as the latter grants: if we feel obliged to deploy analytical modalities in trying to figure out the logic and mechanisms of social relations at any one time and across slabs of time, then we are talking about questions and resources that stem (mostly) from the European enlightenment tradition. There might be a postsecular position according to which those discourses and their objects of enquiry are ultimately only mediations of something much more fundamental – God’s will, deem, or whatever. But to me that sort of stance is a straight religious one, thus probably falling outside the postsecular spectrum as I’m pitching it. And as some kind of (complex) secular rationalist, who thinks that social theory cannot really proceed in any other way, I hope we don’t desert the cause of analytical explanatory understanding too quickly.

Gregor McLennan is Professor of Sociology and Director of the Institute for Advanced Studies at the University of Bristol, UK. His books include Marxism and the Methodologies of History, Marxism, Pluralism and Beyond, Pluralism, and, most recently, Sociological Cultural Studies: Reflexivity and Positivity in the Human Sciences (Palgrave Macmillan, 2006). He is working on a book-length treatment of postsecular social theory.

Simon Dawes is the Editorial Assistant of Theory, Culture & Society and Body & Society, and the Content Editor of the TCS Website.