Last month, we introduced the ‘City as Target’ section of the TCS Annual Review 2009 and the recent special issue on Changing Climates in our TCS Highlights features. As evident in the previous post about the interview with Joy Garnett, we will be showcasing extra material about the TCS Highlights on the blog. Today, we have Tania Roy, one of the editors of the ‘City as Target’ section, sharing with us ‘the most striking image that I recall from the events — it ran on the cover of Timeout, but was taken by someone who, it turns out, is not a professional photographer at all (he had just bought a new camera the day before, and is a resident of the area).’

According to Roy, the image taken by Antoine Lewis speaks of ‘the built environment of the city, of the every-day spaces that are particular to it (the low rise roof top); the juxtaposition of the cricket-playing boys against the special ops discernible in the background on the top of Nariman House is unsettllng. The image is memorable for its openendedness –the photographer was struck by what he took to be the boys’ indiffference to the events, the image might have circulated on the cover of the magazine as an oblique comment on the city’s “spirit” of resilience; for me, it was both unsettling and affecting because of its fundamental ambiguity, which makes it a different sort of photograph from the so-called iconic burning-Taj shots.’ 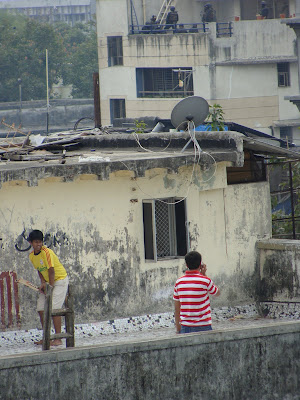 The 2008 Mumbai attacks were more than ten coordinated shooting and bombing attacks across Mumbai, India‘s largest city, by Muslim terrorists […] The attacks, which drew widespread condemnation across the world, began on 26 November 2008 and lasted until 29 November, killing at least 173 people and wounding at least 308. Source:  ‘2008 Mumbai Attacks’, Wikipedia http://en.wikipedia.org/wiki/2008_Mumbai_attacks [accessed 26 April 2010]