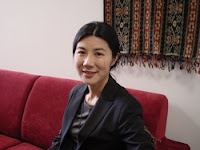 It is generally accepted that biomedical technology has improved people’s health and well-being. Yet, as body studies has increasingly sought to go beyond existing body/mind conceptualizations, the dispute about the ‘rationalistic concept of the human actor’ (Ozawa-De Silva, 2002) has become a central topic for anthropologists, neuroscientists, media theorists, biologists, sociologists etc.
Exploring further, Tomoko Tamari interviews Chikako Ozawa De Silva on  ‘Mind/Body Theory and Practice in Tibetan Medicine and Buddhism’.

TT: You published your first paper in Body & Society, ‘Beyond theBody/Mind? Japanese Contemporary Thinkers on Alternative Sociology of the Body’ in 2002 which introduced Japanese contemporary thinkers conception of the mind and body, which you contrasted to western Cartesian views of the body and mind. Your second paper also address ‘the model of mind and body’ but shifts the context to Tibetan medical practice. I would like to ask a few questions about this paper.
Could you tell us some of the background to your interest in this topic and why you were attracted to Tibetan medical practice as a research field?
COS: My long-term interest has been the cross-cultural understanding of health and illness, especially of “mental” well-being and illness. Once we start thinking about “mental health,” then that leads to the issue of mind/body relation and how different cultures understand the mind-body. Being a Japanese born anthropologist, the Cartesian split of the mind and body immediately struck “artificial” and limited. However, existing literature tended to treat non-Western (or Asian) view of mind-body as monistic as contrast to the Cartesian dichotomy. Being Japanese, I was also acutely aware of the problem of such somewhat idealized and orientalized notion. That was how I wrote my first paper where I articulated the “oneness of the body and mind” is not a given state, but rather it is a state gained through cultivation by using examples of Buddhist meditations. I also conducted ethnographic research on a Japanese therapeutic practice, called Naikan. Naikan is a secular therapeutic practice which comes from Shin Buddhism. Even though there is no explicit mentioning of Buddhism or Buddha, I came to realize the inner-structure of the Naikan is founded upon the Buddhist views on health, illness, suffering, causes of suffering and alleviating of suffering. That was how I became involved with the Buddhist views on body and mind, and suffering and liberation. Tibetan medicine, just like any other medical techniques focuses on healing physical and mental ailment. Based upon the Buddhist understanding of health and illness, Tibetan medicine has very systematic and logical understandings of the causes of illness and treatment. That is how I became interested in Tibetan medical system.
TT: Nevertheless, there is a long history of the juxtaposition of religion and medicine in both the West and the East before the modern rationalistic worldview become dominant in the world of medicine. In the earlier phase, it is clear that religion provided the basis for knowledge, not just of health, but how to live. Thus, I would think that Dharma in the past and for some today, remains the key to knowledge of the way of life.  In your paper, you mention that, ‘Dharma is not only the basis of the theory of the nature of mind, it is also a preventative medicine for mental sickness’. Here, you emphasize the intimate relationship between people’s spiritual life and their health.
Could you explain how and in what ways contemporary Tibetan medical practice still entails spiritual practices?  And how do Tibetan medical practices relate to the Buddhist way of being?
COS: This is perhaps a good question to directly ask Tibetan physicians and not me. From my interviews with several Tibetan physicians, they consider the knowledge in Buddhism is crucial for the practitioners as part of their training, but not for patients. Of course most Tibetans are Buddhists so Tibetan patients have concepts such as past lives, karma, and so on. But Tibetan medicine has been effective toward non-Tibetans including Americans. Dr. Dorjee, whom I spent most time studying Tibetan medicine emphasizes that belief or knowledge in Buddhism is not important for patients in order to heal. Most part of Tibetan medical practices entails taking herbal pills, moxa (if the condition is severe), life style change (refraining from taking too much coffee for rLung), and diet changes. None of these practices involve spiritual practices.

TT: You argue that ‘the confusion underlying contemporary western thought in the shadow of the ‘Cartesian dichotomy’ in the West contributes to the mind/body dualism and this differs from Buddhist thought which is closely intertwined with Tibetan medicine in the East. In this sense, your argument seems to be based on contrasting the East and the West to emphasize the theoretical sophistication of the Tibetan tradition of mind/body understanding.

Whereas you argue that the understanding of the environment as a crucial component of mind/body interaction in the Tibetan medical system, could this be seen to resemble the concept of the ‘vitalist’ body in Ancient Greek medicine.
You also emphasize the view that ‘religion is a science’ in the Tibetan tradition is something also found in the history of western theology and philosophy.
I think that these are important points in the genealogy of the Tibetan medicine, which bring out the similarities and connections between the West and the East. We now see more clearly that there was a flow of active cultural exchanges, even after Descartes (see – Leibniz work on China). In this respect, it seems not so simple to draw a line between the West and the East.
Isn’t there a danger in your attempt to challenge the western body/mind dichotomy of using a similar dualistic theoretical framework to that of Orientalism?
Could you elaborate a little more on your theoretical position here?
COS: I perhaps do not quite understand your question so I may need you to elaborate on this. If I understand your question correctly, the point I made was that dualistic notion of the mind and body is often attributed to the Western Cartesian tradition, and often it is treated that Asian intellectual systems including the tradition of Tibetan medicine also has no conceptual separating between mind and body, but that is not the case. Tibetan medical practice also differentiate mind and body and it does not view body and mind as ‘one.’ But the way the mind and body connection is seen is quite different from the Western (here I mean biomedical framework) view. Mind and body at the gross level are separate but there are subtle level and once we start talking about the very subtle level then mind/body separation no longer suffice. I was not applying the similar dualistic theoretical framework.
TT: Could you please tell us more about your future research and methodological framework to further the discussion of the mind-body relationship in Eastern philosophy and ways of conceiving ‘being- in-the-world’?
COS: Investigation of the Tibetan medical practice is something I plan to continue further. In order to understand the mind-body relationship in Eastern philosophy, it is often crucial for scholars to be familiar with Buddhism (here I mean Buddhist philosophy, Buddhist psychology, Buddhist science). Some sociological or anthropological work on Buddhism or Buddhist practices could be sometimes misleading when researchers merely relied upon ethnographic research as a method since there is a limit to how much one can study the notion of impermanence and emptiness in Buddhism from the ethnographic observations. So I advocate the methodological needs to combine both ethnographic research and scholarly knowledge of Buddhism. Recently scientific studies on Tibetan medicine has been increasing and interdisciplinary methods for social scientists to engage with scientific discourse and discovery of Tibetan medicine could be beneficial.
TT: Thank you very much for your contribution to Body & Society!
***
After the interview, I reflected further on the question of how we can understand mind and body in Tibetan medicine.
Ozawa explainsthat at the subtlest level of consciousness, ‘the Tibetan Buddhist tradition speaks of mind and body as being indivisible’ and the ‘body is understood as subtle energy’.  The mind (consciousness) and the body (energy) are linked.  Consciousness can ‘perceive’ and ‘cognize’, but cannot ‘act’, whereas energy is ‘not itself consciousness, but it has the ability to act on the physical world. It is ‘the mobile energy (rlung), which is a subtle physical, material process’.
I think that this is a crucial point to comprehend the linking process of the body and mind. Here we can refer to Ichikawa who Ozawa mentionedin her earlier paper (2002 in Body & Society 8.2), who argues, ‘(The body) is something material that carries out various physiological functions such as metabolism, and serves as a tool for the spirit to act upon reality.’  In this sense, we could understand the mobile energy as being similar or having a related meaning to the term ‘the spirit’ as defined by Ichikawa. If so, the body would seem to be a physical and material ‘entity’ (a tool) as well as a ‘process’. This could open up various pathways for combining the understanding of the body in Tibetan medicine with the interdisciplinary methods of social science and also phenomenological philosophy.

Dr. Tomoko Tamari is Managing Editor of Body & Society and book review coordinator for Theory Culture & Society and Body & Society. Her PhD thesis is on consumer culture and women in . Her interests include consumer culture, visual culture, space and architecture and food culture. She is currently working on two main areas: the relationship between animation and human perception; domestic living space and architecture design.