To coincide with the publication of our Special Issue on Changing Climates (May 2010), TCS Editorial Board member, Ryan Bishop, interviews New York-based artist, Joy Garnett for the TCS Website.

Ryan Bishop: What is it that first attracted you to photos of the weather as a potential subject for your painting? How do these sources relate to your earlier work and also your more recent work on the Three Gorges Dam in China?

Joy Garnett: For many years I have focused on the disaster in the landscape, developing my own take on Virilio’s accident. My paintings are based on images I gather from various sources on the Internet. I have been preoccupied with two things, primarily: mass produced, globally distributed images — the image in the media — and the landscape as an embattled or even phantasmagorical space, where politics, technology and other cultural forces, as well as the forces of nature, intersect. In my early projects, such as the series of paintings having to do with nuclear testing (1997-1999) and more recent series such as Strange Weather (2005-2007) and the China Three Gorges Project (2008-2009), topical content has to some degree determined the narrative. For the earlier works, I had unearthed particularly spectacular techno-scientific photographs from open access military archives, and re-purposed those images as rather visceral paintings. Later, I broadened my search criteria and sources to include global disasters documented in the news. Currently, it is through such media representations that I tend to find my point of psychological entry as well as my raw material. While the stream of media images tends to function in the capacity of an ‘official’ narrative, generally speaking, artists have the potential through a number of options, painting among them, to manipulate the routinely occurring discrepancies or gaps in this narrative vis-à-vis the viewer. I am interested in agitating within these gaps through a process that decontextualizes the source image in order to anchor it in an incongruous “painterly space”. The paintings offer the possibility of an alternative narrative – one whose ambiguity invites projection and multiple interpretations, even ambivalence, and which may even stir up a kind of discomfort in the viewer.

RB: The links between the nuclear testing series, the Strange Weather series, and the China Three Gorges Project paintings, are quite pronounced and complex. I am interested in two apparently different, but likely deeply related issues. The first is the role of the landscape as the staging ground for human technological experimentation, control and accident. The second is the media environment from which you derive your “found” content and transplant in “painterly space.” How do the material and immaterial dimensions of these spaces intersect in your paintings? And what comes from this intersection?

JG: By ‘material and immaterial’ I imagine you are referring to the real events on the one hand, and the media representations of those events on the other. It is true that while my subject is the media narrative, the vehicle for discussing or parsing this narrative incorporates reinterpretations of the very representations that make up that narrative. This builds upon a kind of cognitive dissonance that I feel already exists within the media narrative – the discontinuity or gaps between the real events and their representations. The paintings play with elements both plastic and conceptual; I find that I’m painting at an ‘intersection’; there is a certain ambiguity or even ambivalence in play that serves to heighten this disjunction while appearing to unify these various elements in the guise if a single image. This is what Lucy Lippard referred to as ‘conceptual collage’ in my work (Lippard 2006); there are several layers or intersecting image regimes living together under one roof, in a single image on one canvas, so to speak.

RB: I was also interested in the ways in which your art uses landscape not so much in the traditional sense of landscape or pastoral painting but as a site of technological imagination and experimentation, as a space to play out both intentional and accidental dimensions of grand technological visions. Similarly your canvas becomes a space for questioning in the form of ‘conceptual collage’ the intentional and accidental dimensions of grand image machines, of visual technologies. So in a sense, I am wondering how content at all levels combines with form/medium in your paintings? And how the frame of the landscape relates to the frame of the painting?

JG: Yes, I suppose I am dealing with actual various staging grounds for disaster, in a Virilian sense, but also in terms of landscape-as-history painting – in other words, in terms of pictorial space. Lately though, I have felt constrained by the various conventions and formats of landscape, however I may have been able to tweak them, and I find that I’ve suddenly thrown out the horizon line. I’m not even sure if it’s coming back! So the frame of the landscape and the frame of the painting are suddenly afloat, aloft, in a way that I haven’t dealt with too often before, or not self-consciously, because I have always been concerned primarily with narratives and representations as we come across them in vernacular settings, and not particularly with the tradition of painterly abstraction. But now, I seem to be moving in a direction where these two approaches are merging. There is a phrase that rings true, from the late Jack Goldstein, the American appropriation artist who produced rather large, apocalyptic painted landscapes based on found imagery during the 1970s and 80s: “Sky is to the 20th Century what landscape was to the 19th Century” (Goldstein 1971-84). And so, oddly enough, I found I’ve come to this very juncture on my own, without really meaning to, where I now see that the accidents or apocalyptic, military-derived events that we become acquainted with through news or through simulated war in entertainment, are chiefly events that take place in the sky or are showered down upon us from the skies. So at the moment, I’ve shifted my attention to that ‘space’ in the air, above ground, where there is no anchor or traditional reference point such as a horizon line or scalable objects on the ground. It has injected my approach to these pictures with a whole new excitement and, well, sense of imbalance, vulnerability and horror. 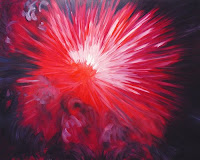 RB: The Goldstein quote has a lot that could be unpacked and provides a nice move to the issues you are working through and exploring. If the shift is from landscape to space, and you are losing or erasing the horizon in ways that aerial visual technologies have provided in the military sphere, for example, what does the evocation of this loss of perspective, scalable objects, placing etc. mean for your approach to traditional canvas, paint, and framing (which are you still using)? Does the latter domesticate the former as a kind of resistance, or does the former explode our concept of painting to the extent that the form and media disappear into the content?

JG: Well, I think it’s fair to say that nothing I am doing in terms of form in painting is particularly new or experimental. Nothing I do ‘explodes’ our concept of painting. However, what I experiment with between my image research and what I do on the canvas itself may be new to me in light of my own longstanding concerns about images. I think that, perhaps perversely, this very unctuous, analogue medium of paint is an excellent tool to turn on the dominant form of the image today, which is electronic and photo-based. Paint offers a real counterpoint as a material and as a mode of communication, and it packs a serious backlog of motifs, languages and genres that can be called into play literally with the flick of a wrist. In any case, I think when dealing with strong content in painting, it is important to limit it, the danger being to force meaning on people at the worst, or to spoon-feed them a pat message at the very least. What’s important to me, from the point of view of someone who makes paintings, is to allow the viewer to come to any meanings – content – on their own. It doesn’t matter, in the end, whether they take away the meanings I intend or not; what matters is their contemplation of the work. To allow that to happen one has to strike a balance between the familiar and the unfamiliar – hence, it’s important to decontextualize the source image just enough, to make it ambiguous or ambivalent enough to allow for multiple readings and non-discursive, visceral experiences.

RB: With this, then, what are some of the issues – both formal and in terms of content – that you are experimenting with in “the Strange Weather” series? How does this exemplify your relationship to the medium, the tradition and/or ambivalent content?

JG: The main issue or area of inquiry for me is the process – or processes – of mediation: individual, corporate-driven, government-filtered, and particularly with regard to the streaming of media images. But in addition to producing artworks as alternative image narratives, I feel it is important to also situate my work in relation to real world events, processes and discourses, however ambivalently or obliquely; to stimulate, aggravate, disturb, astonish and agitate, are part and parcel to art-making, and important to how artworks function in the world. So, to recontextualize a news photo of post-Katrina New Orleans, for example, flooded and on fire, as a painting that hangs in a de-politicized zone such as a museum or gallery, this is to open up a channel between the quite distinct realms of art and real-time news and events. And you could say that to some measure art has always done that, but I feel the juxtaposition of art with dominant media narratives yields a richer, stranger conflictedness now, perhaps than ever before, due to the prevalence of access and networkability of real-time news streams and image narratives among ordinary people. So to me, the solitary insights garnered through making and contemplating paintings reverberates in a profound way with the sense of urgency of any given moment.