In the second of his reports from the Centre of Contemporary Culture in Barcelona (CCCB), Simon Dawes reviews the exhibition ‘Through Labyrinths’

In the foreword to the booklet that accompanies the exhibition, written by Josep Ramoneda, the director of the CCCB, the labyrinth is proposed as the universal symbol of being lost, with different types of labyrinth expressing to different extents the state of being lost.

In the classical model of the unicursal labyrinth, for example, reaching the centre is certain no matter how long it takes, how many turns there are or how lost one feels along the way; if we were to roll it out, we’d end up with a single (Ariadne’s) thread. In the second multicursal labyrinth – or maze – alternative paths with dead ends make escape less certain; if the model of the maze were to be unrolled, it would be more in the shape of a branch. And Umberto Eco suggests, in his introductory essay to the book, a third type of labyrinth – the net(work) – in which every point is connected to every other, and which makes escape unlikely, if not impossible. The network (and Eco suggests the internet, of course, as the prime example) is potentially so large and complex that it may never be coherently unfolded, with limits so beyond imagination that anyone navigating it would probably be unaware of doing so.

And then there are the ‘extreme labyrinths’, such as: the perfect sphere (where we are always at the centre of limitless possibilities); the ant’s nest (where there is no inside or outside, but only connections); and the tree (where the roots, trunk and branches provide a system of forking paths, but no actual circuits, and where points can be found in common between different things). Eco’s evocation of the network corresponds to all of these, and his and Paolo Santarcangeli’s idea of the ororinth, a system of slippery slopes within a pockmarked mountain, where staying inside becomes an impossibility, is another example. Of course, taken to such an extreme, we can interpret almost anything as a labyrinth. Borges (in ‘The Two Kings and The Two Labyrinths’) even wrote of the desert (with ‘no stairs to climb, no doors to force, no exhausting corridors to walk, or walls to block the way’) as a labyrinth (like the perfect sphere), with its infinite number of paths and no chance of escape; without centre or perimeter, and where each point is a potential node of entry or exit.

The exhibition ‘Por Laberintos’ (‘Through Labyrinths’) is co-curated by Oscar Tusquets and Ramon Espelt. It is based largely on Espelt’s book, Laberints, and is in sorts a sequel to an earlier exhibition held at the CCCB, ‘Requiem for the Staircase’, which was also curated by Tusquets. The exhibition constructs a narrative of the history of the labyrinth, beginning with examples of unicursal and then multicursal models, before demonstrating the variety of cultural interpretations and representations of the idea of the labyrinth, and suggesting at the end the possibility of the more ‘extreme’ forms.

Between classical antiquity and the Middle Ages, any variation on the unicursal model, whether found in the ruins of labyrinths or on representations on coins, had been historically treated as a mistake in the design or as a side-effect of the passage of time. After a very long history of representations and constructions of the classical model, however, the possibility of a multicursal form was explicitly represented for the first time in the Bellicorum Instrumentorum Liber (1420) of Giovanni Fontana, whose illustrations of a circular and a square maze, offering the choice of going left or right at the entrance, with more than one way of reaching the centre as well as a series of dead ends, explores the possibilities in detail. 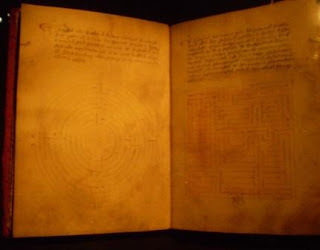 The shift from uni- to multi-cursal designs corresponded in the 15th Century with a shift in their construction and visibility, from stone structures that could be followed by the eye and seen in their entirety from any point, to hedge mazes one had to walk through, and that could only be experienced in parts, or seen in their entirety from far away. One can also see in the logic of the maze the questioning of the religious determinism of cathedral labyrinths, and the construction of the Cartesian self who chooses to enter the maze and to take one way instead of another, while being aware of the risks involved in making the choice.

Focusing upon movement as the essence of the labyrinth (hence the title, ‘through labyrinths’), the exhibition is self-reflexively structured as a labyrinth itself (so blurring the boundaries between form and content, exhibition and exhibit), with the visitor obliged to choose between forking paths (or to at least choose the order in which they are taken, assuming they wouldn’t want to miss out on something) and to turn back from the occasional dead end, with one section decorated to resemble a hedge maze and another made of mirrors, disconcertingly but inevitably twisting towards a cul-de-sac from which you have to retrace your steps to the exit/entrance.

A bombardment of references to myths, structures, representations and metaphors encourages movement through the labyrinth, but with little motivation to spend time examining or appreciating any of the exhibits at length; the only explicit invitation to immobility being when the exhibit itself is mobile, such as the various screenings of extracts from films in which labyrinths play a part.

The exhibition is a conceptual treasure trove of examples and interpretations of the labyrinth, from the Cretan myth of the labyrinth of Daedalus and the Minotaur it imprisoned, to the gardens of Versailles, cathedrals of Amiens and Chartres, photographs by Richard Long, films by Welles and Fellini, contemporary dance by Martha Graham, references to the tales of Perrault and the short stories of Borges, the art of Saul Steinberg and Friedrich Durrenmatt, and the diverse works of Michael Ayrton, Terry Fox and Robert Morris, as well as a seminar on La métaphore du labyrinthe, organised by Roland Barthes and held at the Collège de France.

I listened, for instance, to Guillaume de Machaut’s polyphonic 14th Century composition, Ma fin est mon commencement, whose repetitive motifs retrace their steps from the midway point, before turning a corner to watch the closing scene of Kubrick’s The Shining.

The emphasis on movement means the value of the exhibition is more in the idea than in its realisation, and in the process of exhibiting and the experience of visiting than in any of the exhibits on display. An inventory of the exhaustive references or a list of hyperlinks from which a user can ‘visit’ the examples online would perhaps not have less merit, and little was to be gained from watching some of the film clips, in particular. There could also have been more engagement with the content of Borges’s stories, as there is in the booklet, instead of the window display of book covers and photographs of the author that featured here. As with many exhibitions that explore a concept to be experienced rather than those that display exhibits to be appreciated or analysed, the accompanying booklet is perhaps more satisfying. But like the idea of the labyrinth itself, the exhibition succeeds in inspiring and tantalising, rather than satisfying, those who pass through it.

The exhibition ‘Por Laberintos’ (‘Through Labyrinths’) runs until 09 January 2011 at the CCCB, and is presented in co-production with the Bancaja Cultural Centre in Valencia, where it will also be shown.

Simon Dawes is Editor of the TCS Website, and Editorial Assistant to the journals Theory, Culture & Society and Body & Society. Go here to see his previous blog on another exhibition at the CCCB, ‘Barcelona-Valéncia-Palma (BVP): A History of Confluence and Divergence’