In the first of his reports from the Centre of Contemporary Culture in Barcelona, Simon Dawes reviews the exhibition ‘Barcelona-València-Palma (BVP): A History of Confluence and Divergence’

The Centre de Cultura Contemporania de Barcelona (CCCB) opened in 1994 with the explicit aim of focusing on the theme of ‘the city’, and more specifically on the ‘development of a humanism of the urban phenomenon’. Directed since its inception by Josep Ramoneda, the centre has a history of hosting and organising exhibitions, conferences and debates on the city and the urban, and a collection of papers from its substantial archive is now available online. Participants have included Zygmunt Bauman, Stephen Graham, Saskia Sassen, Abdoumaliq Simone, Nigel Thrift and Eyal Weizman, all of whom have also been contributors to TCS. The theme of the city is also central to TCS too, with our recent and forthcoming specials on Megacities, Mumbai: City as Target and Megacities & Violence. 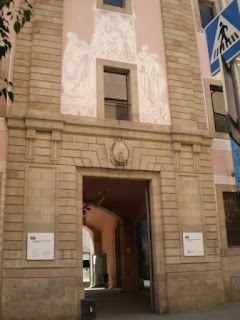 Image: The entrance to the CCCB (Photo by Simon Dawes)

The centre is located next to the Museum of Contemporary Art (MACBA), in a building that is both a partial rehabilitation of an old almshouse and a new architectural construct of a glazed façade that overlooks the large open space of a central courtyard.

The exhibition ‘BVP’, held at the CCCB and co-presented by the Department of Culture and Media at the Generalitat de Catalunya, is jointly curated by Ignasi Aballí, Melcior Comes and Vicent Sanchis. Focusing on both the similarities and differences between the three Spanish cities, it is structured across six themes that address each site in terms of the concept of ‘the city’:

The City of the Future
Language
The Spectacle City
The Ugly City: Urban Planning, Corruption and Tourism
The Hedonistic City
The Medieval City

Language is perhaps the most important link between them, with all three cities sharing in common, though to various and shifting extents, a dominant bilingualism (with Spanish generally in the ascendant and Catalan on the wane) that now intersects with a plethora of other linguistic influences introduced through immigration.

On display are various urban development projects that were abandoned prior to construction, including a model for what would have been the first skyscraper in Europe, as well as the spaces left empty by the dismantling of other projects that, once constructed, proved too expensive to maintain.

In projecting the effects of climate change upon the futures of the cities, the curators predict that all will lose their ports before the end of this century. 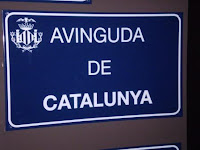 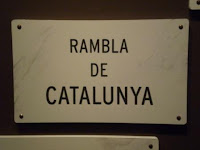 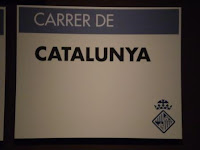 Short texts to accompany each set of exhibits direct us to interpret them as exemplars of certain aspects of ‘the city’.

Images of human statues, we are told, illustrate the spectacle of immobility within the mobile spaces of the contemporary city.

The sameness of souvenirs from each city (fans, plates, mugs, statuettes) demonstrates both the tourist’s desire to appropriate fragments of the foreign city and a conflicting need to retain the familiar.

Photos of street litter after a Saturday night and a reconstruction of a lost property office give us an insight into the waste created in these cities, and the kinds of things we feel the need to consume, yet can do without reclaiming.

This approach runs the risk of being both overly didactic and reductive, and little attempt is made to locate these claims within wider theoretical debates. Some statements are simply unconvincing, such as the suggestion that we should see sand as a ‘celebratory and carefree disintegration, where the city is mirrored by the sea and re-encounters its most resplendent image’.

Nevertheless, the focus on the interconnected processes that affect these three distinct cities, that could otherwise be grouped together and treated the same, reminds us of the need to focus on the finer details of larger, global processes, and on the humanism of the urban phenomenon.

The exhibition runs until 12 September 2010

Simon Dawes is the Editor of the TCS Website and Editorial Assistant for Theory, Culture & Society and Body & Society. Among other things, he is currently researching the relationship between new museums and the city.